TORONTO, ON / ACCESSWIRE / July 21, 2020 / Anaconda Mining Inc. ("Anaconda" or the "Company") (TSX:ANX) (OTCQX:ANXGF) is pleased to announce the initiation of a 35-line kilometre geophysical survey and 10,000 metre diamond drill program at the Tilt Cove Gold Project ("Tilt Cove"), located within the Baie Verte Mining District in Newfoundland, approximately 45 kilometres by road from the Company's Pine Cove Mill and tailings facility (Exhibit A). Tilt Cove is a significant, recently consolidated land package encompassing the same geological trend as the past producing, high-grade Nugget Pond Mine, which had an average recovered grade of 9.85 grams per tonne ("g/t") gold. Tilt Cove covers a 20-kilometre strike extent of the Betts Cove Complex, a highly prospective geological terrane including the Nugget Pond Horizon ("NPH"), the iron-rich sedimentary unit that hosts the past-producing Nugget Pond Mine (Exhibit A).

"As a result of the recently announced $5.51M private placement, we are immediately and aggressively executing on our goal of discovering a high-grade deposit at our prospective Tilt Cove Gold Project. With the success of previous field work, all within sight of a past producing high-grade gold mine, we are confident that Tilt Cove has more high-grade gold to offer. We have commenced a 35-line kilometre ground magnetic and IP geophysical survey with crews now mobilized in the field. Furthermore, we will be testing at least five priority targets over the next six months with 10,000 metres of diamond drilling. The recent financing and the ability to accelerate our work at Tilt Cove makes this an exciting time for Anaconda and is consistent with our strategy to leverage the Pine Cove Mill and permitted tailings facility, fast-tracking the period from discovery to production and realizing full shareholder value from new discoveries."

To date, Anaconda has made the following advances at Tilt Cove:

Geophysical crews are now mobilized at Tilt Cove to conduct a combined 35-line kilometre ground magnetic and IP geophysical survey. This work will be coincident with a mapping and prospecting program, which will be followed by a 10,000-metre diamond drill program at highly prospective targets including the Scarp, West Pond, Growler, East Pond and Betts Cove targets (collectively referred to as the "2020 Tilt Cove Program").

The Scarp Zone - This target is characterized by more than a kilometre of exposed NPH coincident with a similar strike length consisting of 107 gold bearing rock grab and float samples over 0.5 g/t gold (Exhibit D). The area is also characterized by a strong deformation zone adjacent to the Nugget Pond Horizon which dips shallowly northwest beneath younger Silurian rocks. This target will be tested with 6.2 kilometres of ground magnetic and IP geophysics as well as 2,500 metres of diamond drilling and 500 metres of percussion drilling.

West Pond Target - This target is characterized by a 1.3-kilometre long zone beneath West Pond that is up-ice from a very strong gold-in-soil anomaly very similar in character and dimension to the gold-in-soil anomaly associated with the discovery of the high-grade Nugget Pond Deposit as well as a coincident break in magnetic intensity where a north-westerly trending lineament intersects the NPH. West Pond will be tested using 2,000 metres of diamond drilling that will be drilled either from shore or from a barge.

Growler Target - The Growler Target is a newly recognized zone of prospectivity with a strike of 2 kilometres underlain by the NPH and associated with two large shear zones adjacent to the NPH contact. The area also includes recently discovered surface mineralization with channel samples at the Growler Showing assaying 2.75 g/t gold over 5.2 metres and 1.78 g/t gold over 5.0 metres as well as historic chip samples at the Betts Big Pond Showing assaying 8.19 g/t gold over 2.3 metres. 11.1-line kilometres of IP geophysics and up to 2,500 metres of diamond drilling will test this area.

On November 27, 2019 and February 27, 2020, the Company announced an exploration program at Tilt Cove that intended to include 4,000 metres of diamond drilling in addition to a trenching program at Growler (collectively the "Winter Program"). A large portion of the Winter Program was not completed due to concerns over ice conditions required for drilling on the ponds and other factors related to the COVID-19 pandemic. The Company was able to complete the trenching at Growler and 2,975 metres of diamond drilling in 18 holes across four targets at Tilt Cove.

Growler Exploration - During late fall 2019, the Company completed a short trenching program exposing the Growler Showing based on results of grab sampling earlier that summer. Trenching exposed an area of altered and pyrite mineralized sediments that the Company interprets to be a thrust repeated section of the NPH. A total of 47 channel samples averaging 1.0 metre in length were cut in various orientations across the Growler exposure (Exhibit B). The best channel sample results include 2.75 g/t gold over 5.2 metres and 1.78 g/t gold over 5.0 metres (Table 1).

In December 2019, a total of 375 metres of diamond drilling in five shallow holes (GR-19-01 to 05) was completed to test the mineralization exposed in trenching at the Growler Showing. The drill holes were designed to test the down-dip projection of mineralization and the trend of major host structures within the trench area. Although drilling failed to intersect the grades and thicknesses observed in the trench, the Company intends on fully testing the Growler area as it represents a structural repeat of the NPH, and along with the Betts Big Pond Showing, represents an area of excellent exploration potential. Weakly anomalous gold was returned from drill hole GR-19-01 (Table 2).

West Pond Drilling - A total of 998 metres of diamond drilling was completed in six holes (WP-20-01 to 06) from the ice to test priority geophysical signatures (magnetic lows), structural and geochemical anomalies (soil, rocks and tills down-ice to the southeast) at the West Pond Target (Exhibit C). Drilling successfully intersected the NPH sediments with quartz veining, multiple generations of pyrite mineralization and structures (brecciation, faults and shear zones) that are amenable to hosting gold mineralization. Geological interpretation of drill results suggests tight- to isoclinal-folding of the NPH in this area, increasing the thickness of the potential target. Deteriorating ice conditions in early March and the onset of the COVID-19 pandemic prevented the Company from fully testing targets beneath and adjacent to West Pond. No significant assays were returned from initial drilling at West Pond.

Table 2. Assay Highlight Table from the Winter Program at the Tilt Cove Project.

All samples and the resultant composites referred to in this release were collected using QA/QC protocols including the regular insertion of certified standards and blanks within each sample batch sent for analysis and completion of check assays of select samples. Diamond drill core and channel samples were analyzed for Au at Eastern Analytical Ltd. in Springdale, NL ("Eastern"), using standard fire assay (30 g) pre-concentration and Atomic Absorption finish methods. Eastern is a fully accredited firm within the meaning of NI 43-101 for provision of this service.

Mineralized intervals referred to in this press release are reported as drill and channel intersections and are apparent widths only. Not enough drilling has been completed to fully interpret true width at this time.

Composited assays from historical drill core are compiled from historic reports and data filed with the Department of Natural Resources, Newfoundland and Labrador. Sufficient work has not been completed by Anaconda geologists and QPs to validate these composited assays. Rock "grab" and "float" samples are selected samples and are not necessarily indicative of mineralization that may be hosted on the property.

This news release contains "forward-looking information" within the meaning of applicable Canadian and United States securities legislation. Generally, forward-looking information can be identified by the use of forward-looking terminology such as "plans", "expects", or "does not expect", "is expected", "budget", "scheduled", "estimates", "forecasts", "intends", "anticipates", or "does not anticipate", or "believes" or variations of such words and phrases or state that certain actions, events or results "may", "could", "would", "might", or "will be taken", "occur", or "be achieved". Forward-looking information is based on the opinions and estimates of management at the date the information is made, and is based on a number of assumptions and is subject to known and unknown risks, uncertainties and other factors that may cause the actual results, level of activity, performance or achievements of Anaconda to be materially different from those expressed or implied by such forward-looking information, including risks associated with the exploration, development and mining such as economic factors as they effect exploration, future commodity prices, changes in foreign exchange and interest rates, actual results of current production, development and exploration activities, government regulation, political or economic developments, environmental risks, permitting timelines, capital expenditures, operating or technical difficulties in connection with development activities, employee relations, the speculative nature of gold exploration and development, including the risks of diminishing quantities of grades of resources, contests over title to properties, and changes in project parameters as plans continue to be refined as well as those risk factors discussed in Anaconda's annual information form for the year ended December 31, 2019, available on www.sedar.com. Although Anaconda has attempted to identify important factors that could cause actual results to differ materially from those contained in forward-looking information, there may be other factors that cause results not to be as anticipated, estimated or intended. There can be no assurance that such information will prove to be accurate, as actual results and future events could differ materially from those anticipated in such information. Accordingly, readers should not place undue reliance on forward-looking information. Anaconda does not undertake to update any forward-looking information, except in accordance with applicable securities laws. 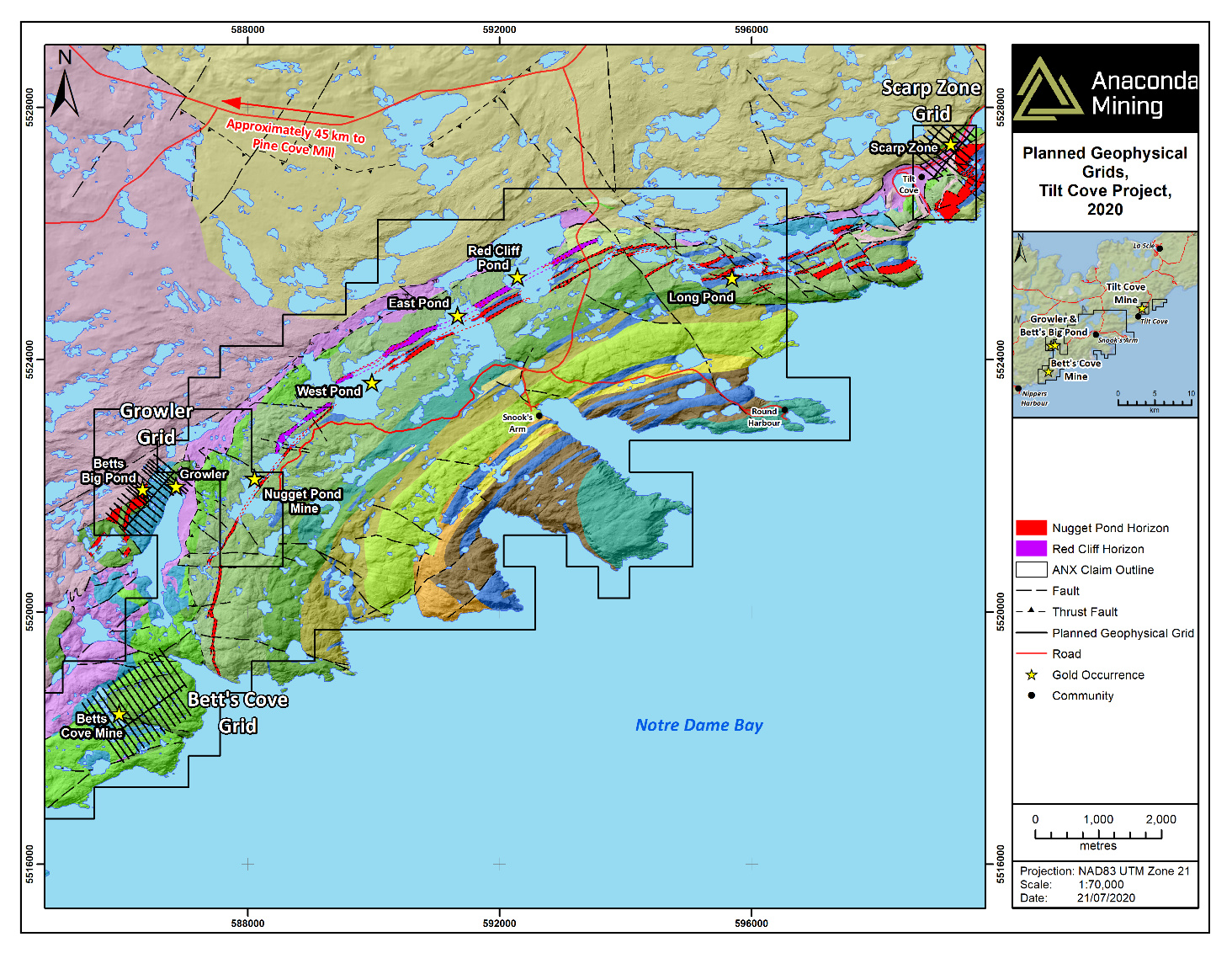 Exhibit A. A map showing the location of the Tilt Cove Project, as well as high priority exploration targets referenced in the press release, including the Growler Showing East, West and Scarp Zone Targets. 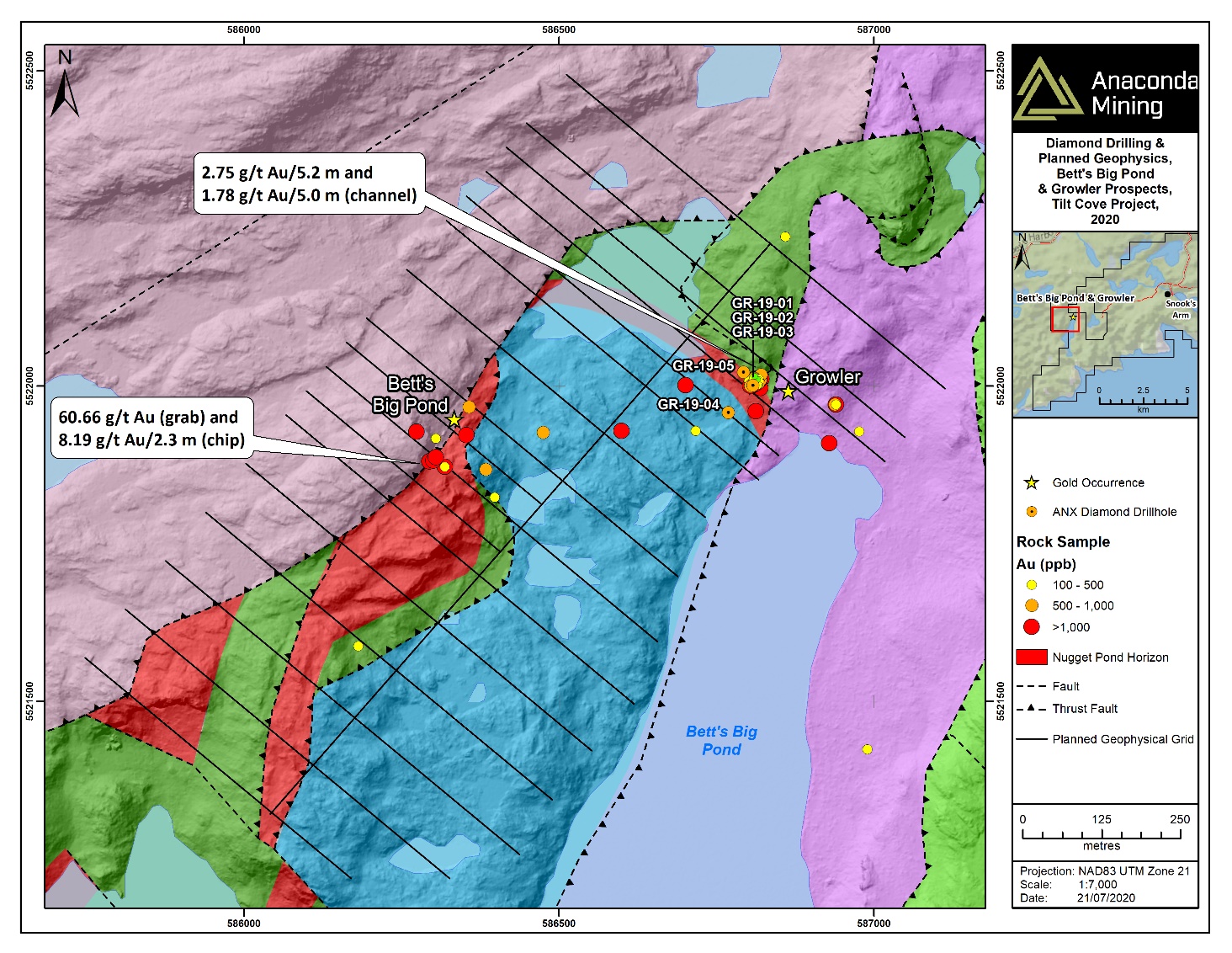 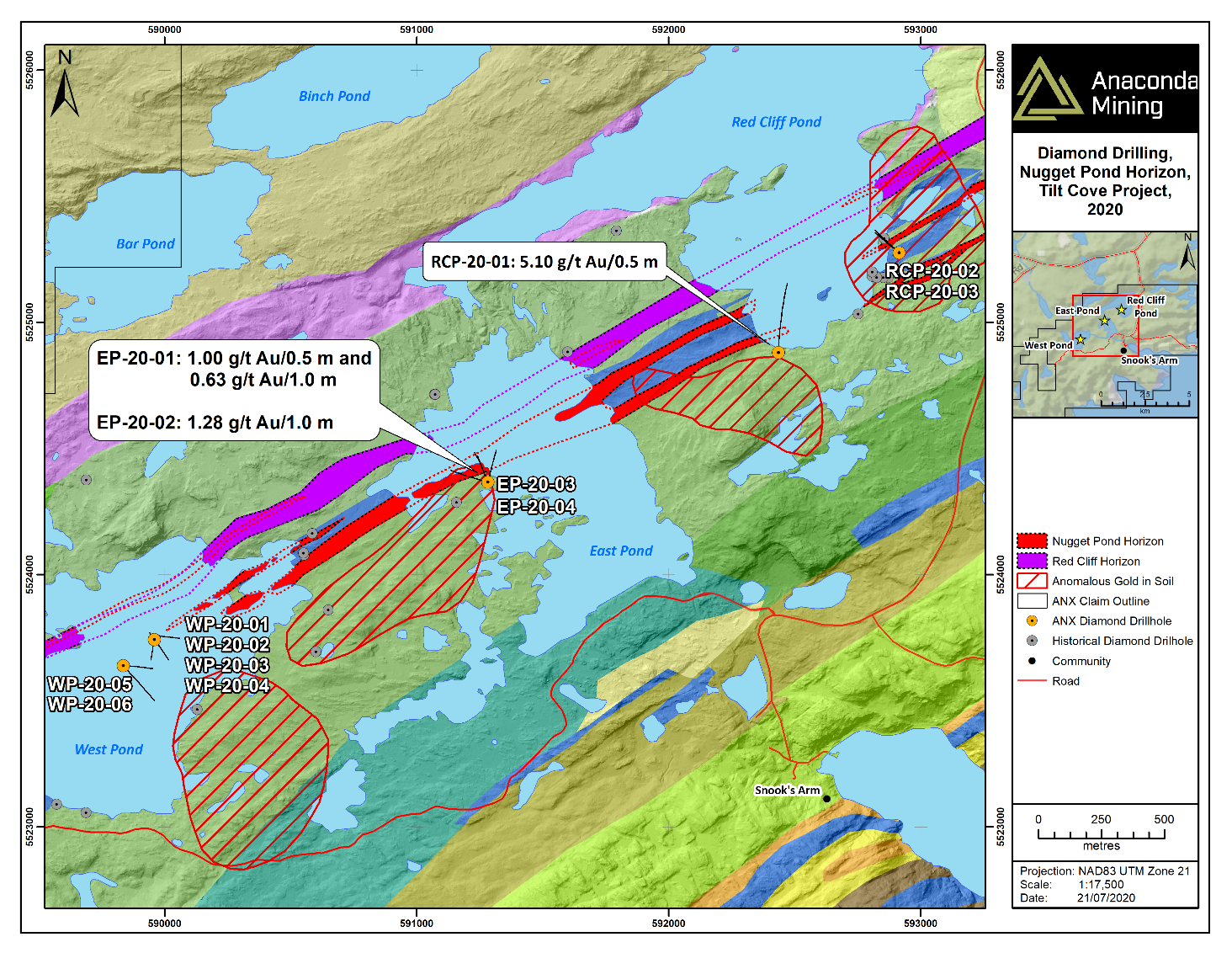 Exhibit C. A map showing the location of high priority exploration targets including drill holes from the Winter Program at the West Pond, East Pond and Red Cliff Pond. Gold-in-soil anomalies are shown in red polygons and are located down-ice (southeast) of the Nugget Pond and Red Cliff Horizons. The Nugget Pond Deposit was situated immediately up-ice of a similar gold-in-soil anomaly. 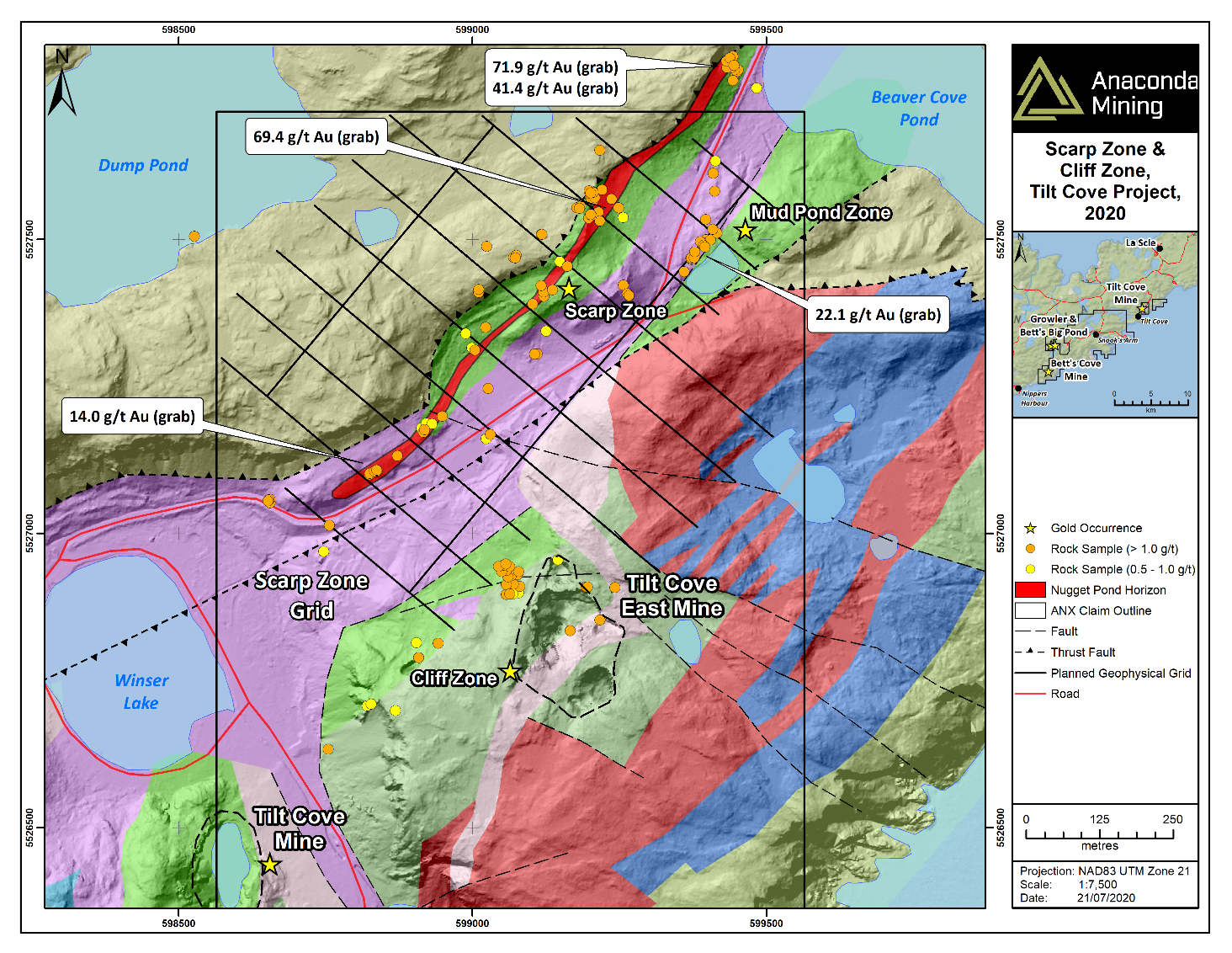 Exhibit D. A map showing the Scarp Zone characterized by more than a kilometre of anomalous gold samples greater than 0.5 g/t gold, a strong deformation zone and associated with a past producing, gold rich base metal mine (the Tilt Cove Mine).