TORONTO, Oct. 15, 2019 /CNW/ - Magna Terra Minerals Inc. (the "Company" or "Magna Terra") (TSX-V: MTT) (SSE: MTTCL) and Anaconda Mining Inc. ("Anaconda") (TSX: ANX) (OTCQX: ANXGF) (together the "Parties") are pleased to announce that they have entered into a definitive Share Purchase Agreement (the "SPA") dated October 14, 2019, whereby Magna Terra proposes to acquire all of the issued and outstanding common shares of Anaconda's wholly-owned subsidiary, 2647102 Ontario Inc. ("ExploreCo")(the "Acquisition"). ExploreCo owns a 100% interest in the Great Northern and Viking Projects in Newfoundland and Labrador and the Cape Spencer Project in New Brunswick. "We are very pleased to have the opportunity to position ourselves through the acquisition of ExploreCo in the established mining jurisdictions of Newfoundland and Labrador and New Brunswick. The Appalachian geological region has numerous multi-million ounce gold deposits with about 30% of them situated in Atlantic Canada. Recent development and exploration success has brought renewed interest in the region, and the acquisition of this significant project portfolio with multiple drill ready targets will allow us to rapidly generate value. We will also continue to look at all opportunities to advance and extract value from our extensive project portfolio in Santa Cruz, Argentina."

"In 2018, Anaconda created a wholly-owned subsidiary to house these advanced stage, highly-prospective, Atlantic Canadian exploration projects, with the aim of developing strategic alternatives to realize value from them. We have established these gold projects in areas with sizeable land packages that provide the platform to build significant district-scale mineral resources in Atlantic Canada in the long term. We have continued to create value at these projects with low expenditures and are well positioned to realize future value for our shareholders through this transaction with Magna Terra, while remaining focused on our core assets at Goldboro, Nova Scotia and the Tilt Cove and Point Rousse Projects on the Baie Verte Peninsula, Newfoundland."

Details of the Acquisition

The Acquisition is therefore subject to Magna Terra obtaining the approval of its disinterested shareholders at a special meeting to be called to that effect on a date to be determined. In connection with the special meeting, a detailed management proxy circular in the form prescribed by the policies of the Exchange and applicable securities regulations will be sent to all the shareholders of Magna Terra.

The closing of the Acquisition is scheduled to take place on or before December 31, 2019 and is subject to numerous conditions customary to this type of transaction, including notably, regulatory approval, and Magna Terra shareholder approval. The closing of the Acquisition is also subject to the following conditions: (i) the execution of an investor rights agreement between Magna Terra and Anaconda (see below for details); (ii) Magna Terra Shareholders' approval at the special meeting of a share consolidation on the basis of one (1) new share of Magna Terra for every seven (7) common shares of Magna Terra presently issued and outstanding; and (iii) Completion by Magna Terra of a financing for minimum gross proceeds of $1.5 million (the "Financing") to be completed on a post-consolidation basis (terms of the Offering to be disclosed at a future date).

No finder's fees will be paid by either Party in connection with the Acquisition. The Acquisition was approved by the independent directors of both Magna Terra and Anaconda.

Following the completion of the Acquisition, but prior to completion of the Financing, it is anticipated that Anaconda will hold approximately 50% of the issued and outstanding shares of Magna Terra, on a post-consolidation basis. In connection with the the Acquisition, the Parties will enter into an investor rights agreement (the "Investor Rights Agreement") pursuant to which Anaconda will have certain rights, including:

All the above rights shall automatically terminate and be of no further force or effect at the later of (i) June 30, 2021, and (ii) Anaconda ceasing to beneficially own more than 10% of the issued and outstanding common shares of Magna Terra (on an undiluted basis).

The Investor Rights Agreement also provides that Anaconda will be subject, until June 30, 2021, to a standstill obligation pursuant to which, among other things, it will not without the prior authorization of the board of directors of Magna Terra, purchase, offer or agree to purchase or negotiate to purchase any securities or assets of Magna Terra other than in connection with acquisitions carried out by Anaconda or its affiliates where such securities, when added together with the securities held by Anaconda, its affiliates and any other person acting jointly or in concert would cause Anaconda's ownership percentage to exceed 35%. The Investor Rights Agreement further provides that Anaconda will vote or cause to be voted, all common shares of Magna Terra beneficially held or controlled by Anaconda, at all shareholder meetings of Magna Terra to be held until June 30, 2021, in favour of each matter recommended by the board of director of Magna Terra for approval by its shareholders at each such meeting.

Details of the Great Northern and Viking Projects

The Great Northern and Viking Projects comprise 2 separate claim blocks (9,775 hectares) that are located 3 km north and 15 km south of the community of Jackson's Arm, NL, respectively (Exhibit A and Exhibit C).

The Viking Project is comprised of 3 mineral exploration licences totalling 224 claims covering 5,600 hectares. Anaconda has the ability to earn a 100% interest in two of the licences, known as the Viking and Kramer Properties, via two option agreements by making aggregate payments of $432,500 ($117,500 paid), issuing 250,000 common shares of Anaconda shares (issued).

The Viking and Kramer option agreements include NSR obligations of 0.5% and 2%, respectively. The Kramer NSR is capped at $2,500,000, after which, the NSR will be reduced to 1%. A total of $750,000 in qualified exploration expenditures is also required on the Kramer Property during the option period.

The Shrik, Stocker, Boot N' Hammer prospects are hosted within a 1.7 km long by 40 to 400 m wide continuous alteration zone, that is controlled by a north-south striking fault. The fault extends immediately to the north along strike with similar repeating fault zones to the east outlining a potential strike extent of an additional 4 km. Initially, exploration in this area will be a primary focus for Magna Terra.

The Viking Project is host to variably tested gold prospects and showings including the Viking, Asgard, Thor's Cross, Odin's Triangle and Kramer Prospects. Trenching along the Viking Trend has returned gold grades ranging between 0.10 and 0.40 g/t over continuously sampled intervals of up to 40 m, and high-grade results including a grab sample from a large boulder of altered granite from the northeast end of the Viking Trend which returned 12.0 g/t gold, and a channel sample grading 9.9 g/t gold and 52 g/t silver over 1.4 metres.

Details of the Cape Spencer Project

The Cape Spencer Project is an exploration stage project that has a history of past-production and the potential for near-term resource growth and discovery. Cape Spencer is located 15 kilometers southeast of Saint John, New Brunswick (Exhibit A and Exhibit B), comprising 104 mineral exploration claims covering 2,365 ha of land acquired via staking and through the Cape Spencer Option Agreement. Under the terms of the Cape Spencer Option Agreement, ExploreCo can earn a 100% interest in underlying mineral properties by making cash payments of $300,000 ($100,000 paid), further payments of $145,000 in cash or equivalent value shares over a five-year period ($10,000 paid), and undertaking $400,000 in exploration expenditures on Cape Spencer within four years. The option agreement also provides for a 2% NSR on earn-in, with a buy-back of 1% of the NSR for $1,000,000 and a right of first refusal on the remaining 1% of the NSR.

The Cape Spencer Project is centered along the Millican Lake Fault, a regional splay of the Caledonia and Cobequid Fault Zones. The Property is underlain by Precambrian Millican Lake granite, and Coldbrook and Cape Spencer volcanic and sedimentary rocks. The Precambrian stratigraphy is unconformably overlain by and in fault contact with younger Carboniferous sedimentary rocks of the Lancaster Formation.

There are several gold prospects that warrant additional exploration over an 8-kilometre strike outside of the Pit and Northeast Zones particularly in the eastern half of the property that will initially be a primary focus for Magna Terra.

Highlights from historic exploration work outside of the main deposit areas from 1982 to 2004 include:

This news release has been reviewed and approved by David A. Copeland, P. Geo., Chief Geologist with Anaconda Mining Inc., a "Qualified Person", under National Instrument 43-101 Standard for Disclosure for Mineral Projects. Widths from drill core intervals reported in this press release are presented as core lengths only. True widths are unknown. All quoted drill core sample intervals, grades and production statistics have been compiled from historic assessment reports obtained from either the Government of New Brunswick or Newfoundland and Labrador.

Magna Terra Minerals Inc. is a precious metals focused exploration company, headquartered in Toronto, Canada. With the closing of the ExploreCo Acquisition, Magna Terra will have 2 district scale, advanced gold exploration projects in the world class mining jurisdictions of New Brunswick and Newfoundland and Labrador. The Company maintains a significant exploration portfolio in the province of Santa Cruz, Argentina which includes its precious metals discovery on its Luna Roja Project, as well as an extensive portfolio of district scale drill ready projects available for option or joint venture.

Anaconda is a TSX and OTCQX-listed gold mining, development, and exploration company, focused in Atlantic Canada. The company operates mining and milling operations in the prolific Baie Verte Mining District of Newfoundland which includes the fully-permitted Pine Cove Mill, tailings facility and deep-water port, as well as ~11,000 hectares of highly prospective mineral lands including those adjacent to the past producing, high-grade Nugget Pond Mine. Anaconda is also developing the Goldboro Gold Project in Nova Scotia, a high-grade resource and the subject of an on-going feasibility study.

The TSX Venture Exchange has in no way passed upon the merits of the proposed transaction and has neither approved nor disapproved the contents of this news release. 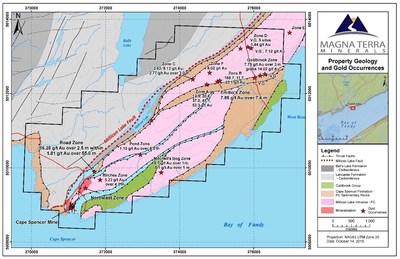 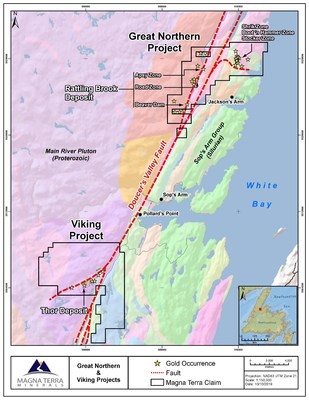